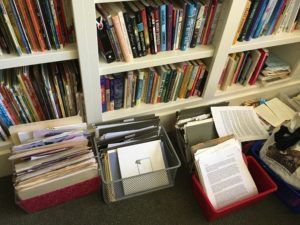 When the Covid-19 pandemic hit the United States in mid-March, our lives changed dramatically. For me, it meant hunkering down with my husband and visiting son, Noah, who had come to Colorado to ski and attend his cousin’s wedding. But after only three days, the ski resorts closed and our niece’s wedding was postponed. Noah, who normally lives in Montreal, was now here for the duration. Canada had closed its borders.

One night, during our second week of family dinners, I suggested digging out the old family videos. Noah was particularly interested in viewing the recording of his 2005 Bar Mitzvah. We all headed into the family room and began hauling out boxes of DVDs, CDs, and VHS tapes from an overstuffed cabinet. What a treasure trove of memories! Our boys’ first steps and birthday parties, family camping trips, even our wedding. Only for some reason, Noah’s DVD, and the outdated VHS tape from his older brother’s Bar Mitzvah in 2002, were nowhere to be found. Were they were behind the photo albums on the  bookshelf in the living room? I went to check. Nope. As a last resort, I went downstairs to my office/writing studio to look in my drawers, bookshelves, and cabinets. Nothing. But the reality of an even bigger problem was suddenly apparent to me. I knew it was there, lurking behind-the-scenes, but I  had ignored it for years. My work space – the creative sanctuary where I write, read, and tutor elementary school students, was a paper disaster!

Let me explain. If you walked into this lovely room (my favorite room in the entire world), you would find shelves of alphabetized books on one wall and an expansive desk on another, complete with an array of pencils, pens, and notebooks alongside my computer. Framed photographs line the windowsill and colorful artwork (many of my own pieces) dot the walls. There are some boxes filled with papers and folders on the floor, but they’re mostly in the corners and out of the way. The  problem, the one that hit me like a brick on this particular night, was hidden inside the drawers and cabinets. Crammed into these closed-up storage areas were notebooks from college and graduate school, years of lesson-plan books, thank-you letters from my former students and their parents, and an overflowing file of homemade cards from my husband and sons. I also had plastic tubs of teaching materials and lots of art supplies.

But the main source of my over-accumulation of paper had nothing to do with my collection of memorabilia, or my life as a teacher. It was my writing!  I had multiple drafts of ALL MY manuscripts, including picture books, chapter books, middle grade novels, plays, songs, poems, blogs, and articles. Many had notes attached to them from editors, agents, authors, and critique partners. I had stacks of notebooks filled with revision ideas. There were conference and class handouts, bins of research, hard copies of rejection letters from agents and editors dating back to 2005, and piles of handouts from the SCBWI workshops I’ve organized.

I know what you’re thinking. “How did this get so out-of-control? And haven’t you gone digital?” All I can say is that for me, “out of sight is out of mind.” After I put something in a drawer, it turns into “storage.” I’ve gone digital, but I also print out hard copies of my work when I revise.

I knew my “paper-saving” was out of control. I just never seemed to have the time or energy to deal with it. But life had changed. I was in the middle of a pandemic. What if I died of the corona-virus in the not-so-distant future? Would my loved-ones be willing to sort through the piles in my office or the files on my computer? No way! In fact, they’d probably throw it all out. If I wanted them to keep any of it (so future generations would know how I spent my working life), I needed to leave  a more organized paper trail. And, since I had just given my writing group four weeks to read the latest version of my MG novel, I had a month to do it.

I continued with my established writing schedule – Get up, walk the dog, eat breakfast, and head to the studio. But instead of writing, I gathered my supplies: 3-ring binders in various widths and colors, plastic bins, new file folders, post-it notes, sticky white labels, and a pile of large garbage bags for the mountains of paper I was about to recycle. 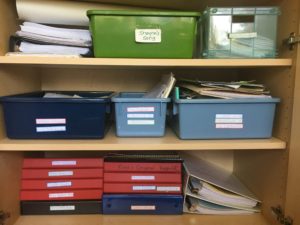 Here’s what I learned:

And if you’re wondering about those Bar Mitzvah videos, my husband found them three weeks later. They were in a box in a cabinet in our basement on top of some old sheets and blankets. Go figure. 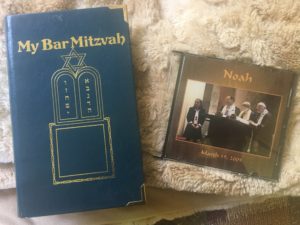