One morning, I woke up with a picture book story fully formed in my head. Characters, dialogue, everything. I got out of bed and grabbed my computer. I wrote down everything I was thinking of and was SO excited. I wrote a picture book!

There was only one problem – the story had no end. My brain had not deigned to give me the solution to the conflict in the story, so I put it away, and left it.

But I’m getting ahead of myself. This is supposed to be an introduction!

Hello, fellow writers! My name is Mary, and in January I had the extreme good fortune to be invited to join this illustrious group, The StorySpinners. I’ve been writing for a while, but my critique “partners” were friends and coworkers, as well as the occasional paid critique at a conference, so I’d never really had a group of fellow writers who would regularly take a look at my work and give me thoughtful, useful and TRUTHFUL criticism and advice. It has been a blessing.

A little bit about me – I’m an early literacy librarian, which means I specialize in kids ages 0 – 5 and their grownups and I know a lot about early brain development and what parents and caregivers can do to help their young people get ready to learn to read. I work in a public library, and have been at this career for almost 22 years. I LOVE it, and I LOVE the books that go along with this job. To say that I’ve read a lot of picture books would be an understatement. They are my absolute favorites and it’s long been a goal of mine to one day have one of my books on a library’s shelf. Personally, I gravitate towards silly books – the funnier, the better – but I appreciate a beautifully written story no matter if it makes me laugh or not.

But until that day in, oh, 2014, I think, I didn’t really believe I was a writer. I write for work, sure, but I’d not done much creative writing at all in my lifetime. 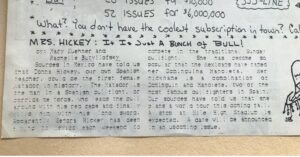 Or so I thought.

Recently I took a dusty box of keepsakes off a closet shelf intending to go through it and get rid of some stuff. Does anyone really NEED to keep birthday cards they got from grandma when they were 7? Probably not.

In that box, though, I found a few remnants of my earlier writing life. An “article” I wrote for my high school’s fake newspaper, about my Spanish teacher living a secret double life as a famous matador

. And a literary magazine from the school’s Writing Club, of which I was apparently the secretary. I had forgotten all about this.

I remembered that time in 2nd grade where I wrote my own “autobiography,” including details from my own birth (that were, my mom has pointed out, completely wrong – the doctor did not call HER to tell her it was time to give birth). And that time in 6th grade where my teacher submitted a poem I wrote, mimicking e.e. cummings’ style, to a poetry contest. And that time in 8th grade when an English teacher encouraged me to submit a story to Cricket magazine. I still have the rejection postcard.

So I guess I’ve been writing longer than I thought.

At any rate, it took me at least 3 more years to figure out how to resolve that first story, and as soon as I had finished, I was RARING to go. I had joined SCBWI at that point, and had access to THE BOOK, so I read the chapter on querying and got to it.  I sent out 6 queries that month, and, surprising no one, got 3 rejections and 3 non responses.

Soon after, I posted something on twitter about having written one picture book and starting to query. An established picture book writer, whom I really respect, called me out and said WHOA WHOA WHOA – you really need to have AT LEAST 3 polished manuscripts before you start querying.

HELLO, RUDE BUT MUCH NEEDED AWAKENING. In my naivete and enthusiasm I had jumped the gun. I really needed to get more stories under my belt, AND make sure they were the best they could be.

Fast forward to 2021. Lo, these many years later, I am still querying, but with 4 manuscripts I’m really proud of and lots of ideas on the go. I’ve pretty much abandoned that first story that jumped onto the page (mostly) fully formed, but I’m grateful for the push my brain gave me to get to work on fulfilling my dream. I’ve found AMAZING friends and mentors in my local SCBWI chapter, and have been fortunate enough to attend a couple of in-person conferences and have my work critiqued by established authors whose opinions, comments and suggestions mean the world to me.

And now? I am a StorySpinner. And boy am I lucky to be one. In the short time I’ve been involved my stories have already become so much better, and it’s such a joy to read my colleagues’ work and cheer them on. They’re a great bunch – Susan, Beth, Rondi, Karen and Coral – and I know I am, and will continue to be, motivated and moved by their inspiration and guidance. THANK YOU, StorySpinners!