Characters Who Need Some Love 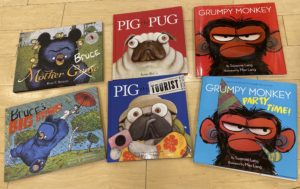 When you think of February and Valentine’s Day, you may think of love and friendship. While I was visiting my local bookstore, I ran across a few characters who may need an extra dose.

One of my favorite characters of all time is Bruce from Mother Bruce. He is the unsuspecting bear that becomes the mother to some “geese” when they hatch. He doesn’t quite seem up for the challenge because he’s lacking the necessary nurturing skills. Bruce is the same old sour puss of a bear in Bruce’s Big Storm, but this time he reluctantly opens his home to the forest animals during a big storm. This helps him in the end when his house needs some fixing up after the storm.

Pig the Pug is another character that is notorious for his bad attitude and crazy shenanigans. Good thing, he has a good dog friend to help him out of trouble. But in the end, nothing calms Pig down more than a full body cast. Poor Pig doesn’t learn his lesson though. He’d back at his antics in Pug the Tourist. Will Pig ever learn to behave? He gets some time to think things over again when he winds up back in a full body cast.

I can relate to Grumpy Monkey’s protagonist, Jim. Sometimes, you just wake up grumpy. And who REALY wants to admit that is how you feel? It took Jim up until the end to come to terms with his feelings. But lucky for him he has a best friend that loves him regardless. Grumpy Monkey Party Time! Is a fun sequel that focuses on Jim’s fear of dancing at a party. When dance lessons from his friends don’t make him feel comfortable dancing at the party, everyone slowly admits dancing isn’t their favorite thing to do either. No fear, porcupine has the perfect crowd pleaser for the party, food!

What other characters have you run across that could use some extra love?