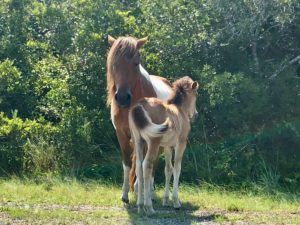 This summer I went to a writing retreat (at the beach home of my friend and critique partner, Susan) on the pleasant shores of Delaware. The house was just north of Chincoteague and Assateague, the setting of my all-time favorite book from my elementary years, Misty of Chincoteague by Marguerite Henry. I hadn’t thought about the book in decades, but when I looked at a map and saw how close I would be, I knew I had to reread the book and to try to catch a glimpse of the famous wild ponies for myself.

A Newbery Honor book in 1947, Misty of Chincoteague was already considered a classic when I discovered the book. The book tells the story of wild ponies, who washed ashore from a the shipwreck of a Spanish galleon in the 1600s,* and lived on the island of Assateague “alone and forever part of the rocks and streams and wind and sky.”

Set in the 1940s, the nearby town conducts a yearly round-up of the wild ponies, swimming them across the narrow part of bay and selling the foals. Paul and his sister Maureen buy the sweetest little filly, who is named Misty, along with her mother, Phanotm, the most elusive, wild mare in the herd. Through heartwarming trials and tribulations, Phantom returns to the wild and Misty remains with Paul and Maureen.

It’s always interesting to reread books we loved as children as adults. Rereading Misty of Chincoteague, I was able to reflect on what was so delightful about the book to the 10-year-old me. But, rereading the book through the lens of adulthood, there were also some disappointments.

As an animal and nature loving girl growing up in suburban Denver, the wild ponies, the windblown island, and the adventures of the Paul and Maureen, siblings who live with their grandparents on a pony farm, captured my imagination.

As I reread the book, I could remember imagining myself as Paul or Maureen, galloping my horse through the ocean surf, riding a pony into town to do chores for the neighbors, and laboring on the pony farm where I mucked the stalls and gentled the mares. In my imagination, I raked clams and gathered oysters, halter-broke colts, rode in and won a big race, and hurled myself into the sea to save a colt from drowning.

It should be noted I have never done any of those things and I never will. But as a child I loved the idea  someone out there had. The book opened up my world and let me know there are many exciting and different ways that people live.

As an adult reader, I cringed at the underlying assumptions in the book. Paul, the 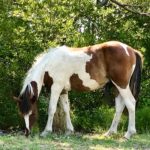 brother, made all the decisions and experienced most of the excitement, while Maureen was stuck in the farmhouse doing chores. It was hard to read Paul’s constant belittling of his sister for being a girl. There were volatile social, economic, and environmental issues simmering beneath the text. The grandfather’s dialect was nearly impossible to read and his over-the-top adult moralizing set my teeth on edge. It wasn’t the exciting adventure story I remembered. In many ways it was just a flawed, old-fashioned children’s book.

But there I was… one hour away. Despite the summer traffic and tourist crowds we woke early and made the pilgrimage to Assateague Island National Seashore. We knew from our research the wild ponies are elusive and often visitors do not see them.

When we drove over the bridge onto the Assateague Island, there they were. The band of wild ponies grazed on the salt grass as the wind blew their manes and tails and the sunlit Atlantic sparkled behind them. The stallion imperiously watched his band, as a trio of juvenile males hung around looking wistful. A little foal with Misty’s coloring, gold and silver with a blaze down her forehead nuzzled and nursed as her mother, reminiscent of the wild mare Phantom, eyed me warily.

Just as my 10-year-old self knew, the wild ponies were special beyond belief. Seeing them was absolutely delightful. All my adult cynicism was suddenly gone and I was left with the magic of the moment. I was in a spectacular place, led by the power of a book, imagination and memory.

*This is a myth. Assateague National Seashore scientists have determined that the ponies are descendants of ponies grazed by colonial farmers on the island to avoid taxes. 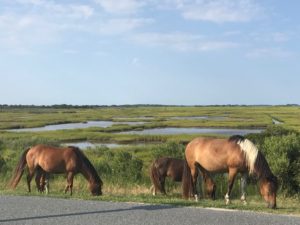 4 Responses to Revisiting Misty of Chincoteague