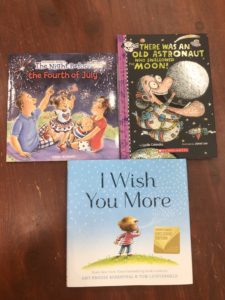 I recently took a stroll through the children’s department at my local bookstore and picked up several good reads that I had to share. Two of the books are adaptations of other stories, and the last one was an original.

The Night Before the Fourth of July by Natasha Wing caught my eye. I realize I’m a little late for a pre Fourth of July read, but it’s a good summertime book. The family in the story start the day by putting on their festive red, white, and blue then take off for all the favorite Fourth of July activities including a parade, BBQ, and fireworks at the end. The story told is in rhyme and Amy Wummer has amazing art to accompany this spin off of the classic, The Night Before Christmas.

There Was An Old Astronaut Who Swallowed the Moon! by Lucille Colandro does a great job of  highlighting some of the sights you can see in space. From the moon, to stars, comets, and satellites, the astronaut devours everything in the universe. In the classic tale, There Was an Old Lady Who Swallowed a Fly, the old lady swallows things that are progressively larger, until she dies, of course. This version deviates from that format but is entertaining and has facts about space included as back matter.

I Wish You More by Amy Krouse Rosenthal & Tom Lichtenheld is told in the light of seeing the glass half full through the prospective of a child. The repetitive phrase, I wish you more, is used to highlight overcoming some of childhood’s challenges like kite flying, tying shoes, and keeping your head above water in the deep end. And finding joy in the simple things. It’s told in a playful way that keeps the story moving all the way to the heartfelt end.

What are your favorite summertime stories?