Ali Benjamin’s book The thing about Jellyfish has rightly won well over a dozen awards, from National Book Award Finalist to National Public Radio’s “Great Read of the Year” list. I loved the story, with its themes of friendship and grief, and its sections neatly divided by the parts of the scientific method. However, it’s not the story that startled, then amazed and finally inspired me. That came from the acknowledgements section at the back of the book. 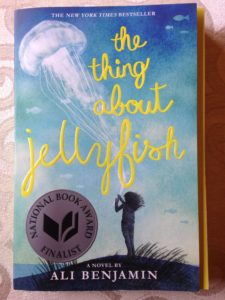 “This story,” Benjamin wrote, “was born from a failure.” A few years earlier, she had become captivated by jellyfish. She dove into their world, learning everything she could about jellyfish and poured it all into a story. She submitted to a magazine. The magazine was interested, and kept it.

I know what I would have done. I would have cried, then forwarded the rejection on to my writing group, The Story Spinners, knowing that they would give me the encouragement and support to keep going. Getting things published is tough, and a support group of people going through the same long process of rejection collecting makes the journey much easier to bear.

This incredible, award-winning story was what emerged. Had Benjamin’s original article been published, I am sure that it would have been fascinating. But it wouldn’t have been this. To have this book materialize out of failure served, for me, as a type of buoy – showing that what springs from the ashes of failure may be beyond our wildest dreams.

Tagged as Ali Benjamin, rejection, The Thing About Jellyfish