On a recent trip through Scandinavia, I committed myself to reading the works of Scandinavian children’s authors. I wanted to reread the books that I had loved as a girl, to view them from the perspective of a writer and to read them in their native lands. I delved into the haunting fairy tales of Hans Christian Anderson, the whimsical odd adventures and wisdom of Tove Jansen’s Moonintrolls and the very dark adventures of Astrid Lindgren’s Lionheart Brothers. But the best part of my reading journey through Scandinavia came from becoming reacquainted with Pippilotta Comestibles Windowshade Curlymint Ephraimsdaughter Longstocking.

I loved Pippi Longstocking. I wanted to have red, wild hair, to live alone in my own wacky home, to create my own rules and (most importantly) to have a pet monkey. All along, I knew in my heart I was just another Annika, a regular, good girl… but wouldn’t it be fun if I was different!

With a statue of Astrid Lindgren at Junibaken, a museum that celebrates children’s literature in Stockholm, Sweden.

Pippi has enchanted millions of children like me over the decades since she was created in Sweden in 1945. Forever nine years old, she sprang to life in the post-WWII world and has been shocking the world ever since. Pippi is still wildly popular in Scandinavia and is one of their most notable literary exports. Astrid Lindgren is a national hero and is even pictured on the 20 krona banknote. A children’s author… imagine that!

Pippi is quite the child. She turns the tables on bullies by hanging them from a tree, terrifies policemen who want to put her in a children’s home, refuses to learn her “pluttification tables,” rolls out her biscuits on the floor and heroically rescues children from a burning building. The fantastical is presented as commonplace and the world Pippi lives in is magical. The books are funny, irreverent and entirely enjoyable.

I realize that my girlhood admiration of Pippi was because she was a person who could do anything and was never bound by the rules that govern everyone else. The books are anti-authoritarian, with an undercurrent of feminism. It turns out that Pippi Longstocking often ends up on banned book lists because of these themes. One of the hallmarks of her character is that she never conforms to societal norms and that the adult world is held up to scorn and critical evaluation.

Pippi is inspirational to me as a writer because she breaks with conventional ideas about how children, especially girls, should behave. Re-meeting Pippi made me want to write children’s books that make them imagine something different from what they think they know. Pippi Longstocking may not have the same effect on the current generation of young American readers that she had on me. But today’s girls and boys need to have characters like her to love. They deserve characters who can help them look at their world with a more discerning eye and give them the courage to act in new ways. We need to make sure that our children have their own “Pippi” to encourage them to have fun, to be a bit more daring and to have faith in their own abilities.

What Are Kids Reading These Days? 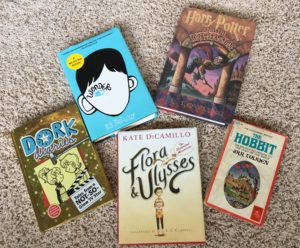 For the past two years, I have had the privilege of being  a judge in the Colorado Humanities Center for the Book’s Letters About Literature Contest. This is a literary competition where students in grades four-twelve write letters to authors of their favorite books. Since most of these children have teachers who are passionate about reading and writing, the books chosen are some of the very best out there and many of my own favorites.

So what are kids reading these days? I am a judge in the fourth-sixth grade category. As you would expect, many eleven and twelve-year-olds are drawn to humorous titles such as Jeff Kinney’s THE WIMPY KID and Rachel Renee Russell’s THE DORK DIARIES. Others enjoy dramatic non-fiction like Jon Krakauer’s INTO THIN AIR, or inspirational biographies like Misty Copeland’s MY LIFE IN MOTION and Malala Yousafzai’s I AM MALALA. There are also the lovers of fantasy  who are obsessed with JK Rowling’s HARRY POTTER series and JRR Tolkien’s THE HOBBIT and LORD OF THE RINGS trilogy.

But more than any genre, these pre-teens are choosing books that touch their hearts and evoke emotion. Titles such as John Green’s A FAULT IN OUR STARS, RJ Palacio’s WONDER, and Wendy Maas’s A MANGO-SHAPED SPACE and GRACEFUL, show up year after year. Pam Munoz Ryan’s classic, ESPERANZA RISING, Katherine Patterson’s A BRIDGE TO TERABITHIA, Jerry Spinelli’s STARGIRL, Jennifer Nielson’s A NIGHT DIVIDED, and anything by Kate DiCamillo, are also favorites. Like adults, children want to be moved in a profound way by the books they read.

When drafting their letters, the students are required to use good grammar, strong word choice, and creative devices such as metaphor and simile. They have also been asked to relate an event in their life to the book they have read. This might be a problem with a friend, a family crisis, or the competitive nature of school and sports. One student wrote about being lost on a hiking trip, another expounded on coping with a parent’s illness, and a third described the agony of moving to a new town and school. But when a student vividly described how much she wanted to “jump into the book” to comfort a character, I was impressed. She showed me her deep sense of empathy and insight, and articulated what I had felt when I read the very same book.

Books can surprise the reader. Years ago, when one of my sons was in high school, I gave him A MANGO-SHAPED SPACE. I was hoping that when the main character discovered she had a sensory disorder called “synesthesia,” it would resonate with him. And it did. I will never forget the smile on his face when he bounded into the kitchen. “I’m just like her,” he announced. “Like who?” I asked. “The girl in the book, Mia. I have what she has. We’re both amazing artists, but algebra and Spanish make us crazy.” A year later, when he wrote his college essay, he described his synesthesia in full detail, emphasizing the point that he was “hard-wired” to be an artist.

As a writer of middle grade fiction, here’s my takeaway from reading these letters – The books we write are important. They help children navigate the ups and downs of their roller coaster lives. Writers have an obligation to dig deep and create characters and stories that will touch their readers in ways that make them say, “That’s me.” Your character can challenge the reader to keep going, to try harder, to be compassionate. More importantly, your book can help the reader understand that he/she is not alone.

Being a judge in this contest has been inspirational. Kids in this age group are often considered  anti-social, phone-obsessed, video-game-addicts, even bullies. But these letters have convinced me that after reading a powerful book, these same children are empathetic and deep-thinking.  After attending literary agent Donald Maass’s workshop on “The Emotional Craft of Fiction” last weekend, I know he would agree with me. He told us over and over that we change lives by writing good fiction… that a great story opens a reader’s heart and gives them a sense of hope.

So get to it people. Sit down, open up that computer, and write a book that makes your reader feel something. You might change someone’s life, and in doing so, improve our world in ways you can only imagine!

What books have moved you or affected your life in some way? Send me some titles and I’ll put up a list.