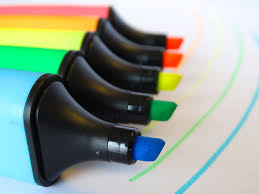 I started my current novel with an idea, a scene, and a sense of an ending, and then began writing. I finished that draft and while technically I could label sections as beginning/middle/end, I knew it wasn’t strong enough structurally. It didn’t feel done. So I outlined what I had, and then worked to devise new plot points, scenes, characters, motivations, to bring it into a more classic three-act structure.

And then I did it again.

And then I did it again.

But I finally got to the point where I felt like the big moves were all there and it was time to tighten, refine, and revise. My novel was created and lives electronically (I heart Scrivener), but I printed it out for this last stage.

Because I felt like I wrote the drafts of my novel in a slightly haphazard fashion, I wanted to be very methodical in the revision process itself. I used, will use again, and advocate for, a dual process – one on paper and one on computer. Because while there are many things you can do on either platform, there are some things I believe you can do so much better on one vs. the other.

I began on paper with a small pile of highlighters and a pen. I decided there were certain things I wanted to look for, and by highlighting I could see at a glance how often various things were occurring.

After reading a section, I flipped back through the pages. This gave me a strong visual as to how often things were appearing, how much white space appeared between repeat highlights, and what I needed to change based on what I was literally seeing. For example, I often saw instances of orange tightly grouped. I would reread that section, determine which adverbs were most important to the reader understanding how people were moving, talking, or feeling, and replace or cut the others.

When I found something I wanted to revise electronically, I didn’t pause and turn on my laptop. I didn’t want to disturb the flow of my reading, and I didn’t want to get too ahead of myself – changing things that appeared later in the book and therefore having my paper copy already be out of date. So this is where another form of paper came in handy – my notebook, to jot down items on my ‘to do’ list.

The main tool I used on my computer was word search, not only to find where I was in the text but also how many times a given word or phrase appeared. A simple Find (crtl-F in Word, the search bar or Text Statistics in Scrivener) can tell you how often you use a word, or phrase, and where it appears in the text. I used this function a few times.

Sometimes I used it when a word or phrasing jumped out at me. As I read through, I realized that more than once, something in my novel was ‘perfectly still.’ The phrasing stuck with me, so I decided I could use it only one time. I used search to quickly find where it appeared and zipped out the extra occurrences. I also used search to distinguish character voice. For example, I decided one character would be the only one to say “just” or “practically.” Rather than keep that in my head as I read on paper, at the end I found every instance and replaced it if had hopped into other characters’ speech.

I also used it to look for instances of “I look,” “I see,” etc. This novel is in first person, so I don’t need to write “I see an apple tree.” That type of writing is distancing, and the readers knows the character saw it (or else how can they tell them about it). Rather than trying to find it as I went, I used the find function to locate those places in the text and then decided what edits to make.

I may have gone a little overboard. Although it is satisfying (to me) to create a list and check things off one by one, looking at pages and pages of things you still need to do is overwhelming. Revising via highlighter is not for the faint of heart. It is a slow process (cap/uncap, cap/uncap) and, surrounded by colors, at times I needed a cheat sheet (what was green for again)? But I will always plan to review my novel in both mediums, paper and electronic, to create new ways of looking at and revising my work. And I should be done soon…

What Makes a Great Book? 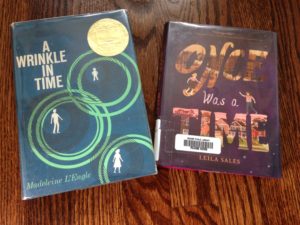 I picked up Leila Sales’ amazing book Once Was a Time at the library last week. Immediately, I was engrossed in its themes of history and time travel and, above all, friendship. It made me start thinking about what makes a book great. I know what I do when I read what I think is a great book (and what I did with Sales’ book) – I fall in love with the language and the characters and the intricate weaving of the plotlines. I cry towards the end, hug the book when I finish, and finally turn right back to page one and voraciously start the whole thing all over again.

But, as I said, that’s what I do. It isn’t what a great book is. Author and rare book dealer Rick Gekoski tried to answer this same question in the context of the Man Booker Prize, the annual award for the best book written in English and published in the United Kingdom. In a 2011 article for The Guardian titled What’s the definition of a Great Book?, he wrote “When you read works of this quality you often feel, and continue to feel, that your internal planes have shifted, and that things will never, quite, be the same again.”

Shift, change, movement, transport… My definition of a great book would be one that transports the readers — in both meanings of the word. Readers should feel first that they are in another place or time, and second that they are overwhelmed with emotion. For me, that feeling initially came when I read Madeleine L’Engle’s A Wrinkle in Time. Reading Wrinkle gave me insight into concepts of advanced physics, and changed my beliefs of what is possible and what is real. The book transported Meg and Calvin and Charles Wallace and me across space and time, but more importantly, it transported me to a place of happiness in the knowledge that love will always triumph.