Gone to the Dogs

A graduate level conference for social workers, focusing on human-animal interaction, was the last place I expected to find a recommendation on the practice of writing. But there it was, a gem of information, right in the midst of sessions about addressing trauma through the use of therapy animals. 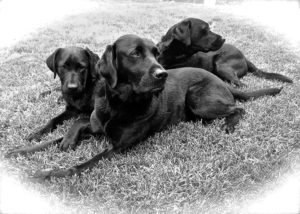 Like all writers I know, I wear a lot of different hats. I always hesitate when people ask what I do. My usual answer is that “I volunteer a lot.” The dozen or so organizations where I give my time center around three areas: science, education, and dogs. That meant that the “Animals on the Brain” conference, hosted by the University of Denver’s Institute for Human Animal Connection (HAIC), was right up my alley.

Much of the conference focused on brain chemistry – specifically, the hormones oxytocin, which promotes trust and bonding, and cortisol, which is released in response to stress. Working with animals tends to release oxytocin in the human brain. As a result, social workers are increasingly incorporating animals into their practice with individuals who are autistic or who have experienced trauma.

Nina Ekholm Fry, Director of Equine Programs at HAIC, was in the midst of a talk on the Social Neurobiology of Equine-Assisted Work when she made the observation that changed my writing practice. “Your state of mind can be changed, it can be affected. Your state of mind goes to sensations and thoughts.” She continued, “I have input in that. I can change what I feel.” Before working on a difficult task, Fry said that she reads through a list of compliments her students have sent her. This, she explained, changes her brain chemistry and thus her mindset.

My writing sessions have all too often started with the mundane – and the depressing. Filing a rejection. Figuring out where to send something next. Wondering whether or not I should follow up on an article sent months ago, given no response from the editor. And that, I realized while listening to Fry, is completely wrong.

As a result of the conference, I’m separating the filing, the rejections, the “what’s next” questions out from my writing sessions. Starting with a dash of anxiety-inducing cortisol is not the way for me to be productive. Instead, I’m collecting a file of kind words and published articles and rave reviews (okay, those may all be from my writing group!). I’ll review those before starting my writing. And, of course, spend a whole lot more time petting the dogs.