The Joy of Writing 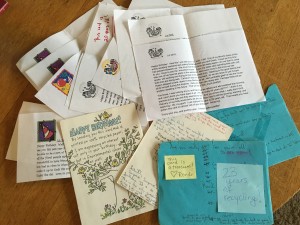 Twenty-five years ago, my co-teacher Liz gave me a birthday card that said, “This card is printed on recycled paper. Please return it to me when you get the chance so I can send it to you again next year.” I smiled and dutifully handed the card back to her, totally forgetting about it in a few weeks. But when March rolled around the following year, there it was on my desk, complete with a new note inside: “Here it is again! Have a great day! Soon you’ll have someone else around to share a birthday.” My second son was about to born. I returned the card to Liz and you can probably guess what happened next. The back and forth of the card became a yearly tradition. Little did we know it would continue for at least a quarter of a century.

Five years after I first received the card, Liz and her family moved to Texas. This meant we would need to use the United States Postal Service to transport the card back and forth between Denver and Dallas. We developed a system. Liz sent the card to me in March, and I sent it back to her in October, along with a new card for her own birthday.

After ten years, every inch of possible writing space on the card was filled with Liz’s newsy greetings, meticulously dated. So by year eleven, she began typing her messages on the computer. She added a birthday graphic on top, printed the note, and tucked it inside the original card before mailing it to me.

By year fifteen, the spine of the original card was beginning to fray. Its blue envelope was also split into two pieces. I’m not sure why, but neither one of us felt the need to tape it back together. We just stuffed the entire pile of paper into a manila envelope, stuck two Forever stamps onto the top right-hand corner, and dropped it into a nearby mailbox. It was around this time that Liz’s notes were becoming longer and more literary. Maybe it was the large, blank space on the computer screen, aching to be filled. Or perhaps she (and I) had reached an age that made us prone to nostalgic ramblings. One thing was for sure. In a world of abbreviated texts, flashing Emojis, endless emails, and Facebook photo postings, Liz’s notes had become full-fledged letters. Letters that chronicled our lives with meaningful reflections and joy. Great-big-smiley-joy.

Next week, I will be throwing a huge party for my dad’s 90th birthday. After sending out a slew of invitations, the RSVP’s began to pour in. Our guests had the choice of calling me or sending an email. Although most of the respondents are in their 80s, many chose the email option. I was amazed at the touching words that flooded my “in” box. “With happiness in our hearts, we look forward to joining you and your family in celebrating Harold at this momentous time. 90 years is special – how appropriate for such a special friend!” And this one: “We can’t wait to celebrate this occasion with our friend Harold whom we love.” Also: “Judy and I are delighted to accept the invitation to this milestone event!” The people who called me were more matter-of-fact in their responses. It was either “we’ll be there” or “we can’t make it.” But the writers – the writers were filled with joy.

Writing enables us to express ourselves deeply. We often write what we cannot say out loud. So when you open your journal or turn on your computer to compose, edit, revise, cut, rework, or scream… take a minute to remember why you are doing this in the first place. It brings you joy. Really, it does.