A Garden of Books 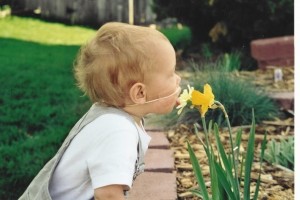 Volunteering at my local middle school library has revolved around un-shelving books. It’s a lot like gardening. According to the librarian, kids stop checking out books when they’re overwhelmed by sheer numbers to select from, so we’ve been carefully weeding out titles, starting with fiction.

Assignment number one: judge books by their covers. Seriously. Kids rarely choose “ugly” ones. To remain impartial-ish, I was given parameters regarding what ugly entailed, but was also allowed to turn a blind eye on uglies that hid good stories. The librarian and her many student assistants had the final say on what titles got axed. Once in the groove, I began to notice stylistic patterns in ugly cover trends as the decades progressed, especially in contemporary works. The breakdown:

If ever I’m in charge of cover design, I’m going to my local school library to study which titles have withstood the winds of time before making a decision. There were well over 500 books I pulled off those shelves, all of them unsuspecting victims of the uglies … and even still, the purge wasn’t complete.

Assignment number two: With ugly covers off the shelf, it was time to roll up my sleeves and dig deeper. Titles published before 2000 that hadn’t been checked out at least once over the last five years were to be added to the doomsday pile. Nearly 400 books are on that list. It’s been depressing clearing off some of my favorite authors and titles—Avi, Judy Blume, Chris Crutcher … I even pulled five Newbery and Newbery Honor books, and this was just through the C’s!

Realizing what limited shelf life most books have—even ones whose check-out cards are filled with date stamps from yesteryear’s adoring fans—has been eye-opening. Libraries sometimes leave me feeling downhearted when I see all the books that aren’t mine cramming their shelves, but now that I understand the truth about a book’s life span, this also means that my stories are still in the seed stage, with time to mature before being born into the world, swaddled in some absolutely fabulous cover. Their clocks haven’t started ticking.

Assignment number three: Cuddle up with an ugly cover, even if the novel is gasping its last breath. During October, the librarian made a graveyard display with doomed books and RIP signs. For November, she had “blind dates with (ugly) books.” In December, uglies were disguised as presents. By January, several compost-bound books had been “re-potted” on the shelves, with brand new checkout dates to keep them rooted for a few more years.

The school library-garden still has weeding to be done (I’m only through the F’s), but if it means more kids are checking out books, I’m willing to dirty my knees. And while I thin out old growth to make room for other books to bloom, I’ll be dreaming up ideas for new novels, hoping that someday they, too, will be planted here, ready to be plucked off the shelf. 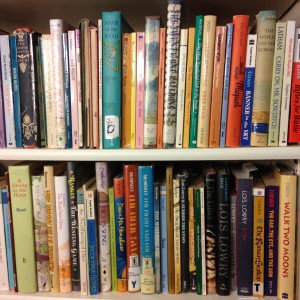 My January tradition isn’t getting into shape, losing weight, or becoming organized. Instead, I watch for the American Library Association announcements, and get my hands on the latest Newbery Award winning book as fast as I can.

I’ve loved the Newberys since I was old enough to read them. This award, given to “the most distinguished contribution to children’s literature,” began in 1922. I started collecting them in the early 1990s, then got serious a few years ago about tracking down those last few missing books.

Carrie Seidel and I have more in common than membership in this wonderful writing group. She also collects the Newberys. Carrie’s shelves are full of hardbacks, and she especially loves the old library hardback editions with their clear plastic coating and cards with lists of names inside the cover. In contrast, my collection began at thrift stores, so has a lot of paperbacks. And if I really love a Newbery Honor book, it gets shelf space right next to the award winner for that year.

This year’s winner, Last Stop on Market Street, by Matt de la Peña, was a shock. It’s a picture book. I have to admit that I was annoyed. A picture book winning the Newbery? Then I took the time to read it, and re-read it, and think about the award. The writing is tight and elegant and lyrical; the story is timeless. It’s a gem of a book.

With our youngest in college this year, I once again have the time and energy to devote to writing. I have plenty of picture book ideas that were started and filed in those two decades devoted to active parenting. And so this year, I’m eagerly awaiting March, with the ReFoReMo (Reading for Research Month) Challenge offered by Carrie Charley Brown. The idea behind ReFoReMo is to use the month to delve into and study picture books—an average of five a day—and use them as mentor texts for our own stories. Here’s the link for more info:  http://www.carriecharleybrown.com/reforemo

Who knows? Perhaps one day there will be another Newbery Award winning picture book, this time with my name on the cover. Not likely, but it sure is fun to dream!